We recently celebrated 14th Birthdays for both our male Border, Buddy and his Sister, Howdy. She resides with her human companion, Suzy Gillette about twenty miles west of Fredericksburg. Fourteen years old in human years equals 98 dog years- now that’s really old and calls for a PARTY!

Buddy on left and Howdy in the middle as puppies. Howdy was a large puppy born breech. I had to help deliver her myself.

An event of such grand significance, in addition to Howdy and Suzy, demanded we invite our good friends Tom and Linda Norris. They’re invested in our family and willing to act a little silly to celebrate whatever, so long as wine is served. Trudy made scarves for the birthday dogs as well as scarves for Bella, our female Border collie, and Little Jack, our Texas Brown dog. Their canine attendee scarves had printed messages that read, “He’s Our Buddy.”

A grown up Buddy

A grown up Howdy

As you can see, both Buddy and Howdy have almost identical markings. The big difference is that Buddy is black and white while Howdy is red and white. Their behaviors are almost identical- both being rather shy, loving, and extremely smart.

Trudy put together a menu fit for a canine banquet. It was as follows: 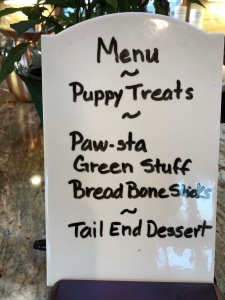 Mighty tasty I might add. Needless to say this menu was for the human attendees.  The meal for humans was served in dog bowls (see below). The doggies had bowls overflowing with doggie treats and favorite canned dog food.

Admittedly, ours were brand new dog bowls, but what a lark to see the humans eating their “paw-sta” from dog bowls. All really got into the spirit of the party and enjoyed their meals.

Needless to say we also enjoyed snacks and appetizers prior to the big meal. This included a snack mix, we referred to as Puppy Chow.

The tasty appetizers were largely for the human attendees at the party, but I’ve been know to sneak a few treats for our doggie companions. They were mighty good and enjoyed by all!

A sampling of the tasty appetizers

As you might expect some adult beverages were available to heighten the enthusiasm of the human companions. These came in red, referred to as Buddy’s Bonanza, and white, referred to as Howdy’s Hurrah. The dogs were served generous supplies of cool, fresh well water.

Following the meal, cookies were served to the human companions. As you can see, Trudy outdid herself by creating cookies in the image of dogs. 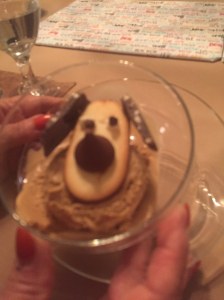 Needless to say, both humans and dogs enjoyed themselves. We celebrated our faithful dogs, told stories about their skills and foibles, and described how they mirrored our own aging process. Both dogs are slowing up. Both dogs have some health problems. Buddy suffers from a weak rear end. It gives out on him periodically. Nevertheless, he is always anxious to load up in the pickup and cruise the ranch. Admittedly he can no longer leap into the bed of the truck, requiring me to catch him mid-air and lift him in. Both dogs continue to play vital roles in supplying the affection and loyalty to their human companions.

The occasion brought to mind the Ode To A Dog written years ago by George Vest who was a Missouri State Senator. It turned out that a loyal and much loved dog had been shot and killed by a neighboring farmer who suspected the dog was marauding his stock. The State Senator presented in court, representing the bereft dog’s owner. What follows was this lawyer’s poignant closing argument to the jury.

A Portion of George Vest’s Closing Argument To The Jury:

Gentlemen of the Jury: A man’s dog stands by him in prosperity and in poverty, in health and in sickness. He will sleep on the cold ground, where wintry winds blow and the snow drives fiercely, if only he may be near his master’s side. He will kiss the hand that has no food to offer, he will lick wounds and sores that come in encounters with the roughness of the world. He guards the sleep of his pauper master as if he were a prince. Where all other other friends desert, he remains. When riches take wings and reputation falls to pieces, he is as constant in his love as the sun in its journey through the heavens.

If fortune drives the master forth an outcast in the world, friendless and homeless, the faithful dog asks no higher privilege than that of accompanying him to guard against danger, to fight against his enemies, and when the last scene of all comes, and death takes the master in its embrace and his body is laid away in the cold ground, no matter if all other friends pursue their way, there by his graveside will the noble dog be found, his head between his paws, his eyes sad but open in alert watchfulness, faithful and true even to death.

Such strong and loving sentiment for our loyal canines, seems to me, to deserve an occasional celebration. I recall with love and amazement how Buddy as a half grown Border collie broke up a fight between two bulls and then herded our bull back across the neighboring ranch to the break in our fence. I also recall how when I was laid up for six weeks with a bad back, how Buddy laid beside me virtually the entire time. Such loyalty from a dog earns loyalty from this human.

Happy Birthday Buddy and Howdy. For our lives, you have added much.

Buddy with his place in the sun. Rest well my old dog for you deserve it.