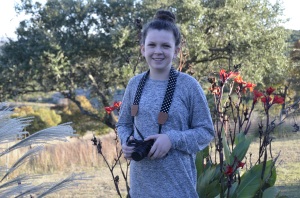 Ramsey Hutton is now the official photographer for Views From Medicine Spirit Ranch. Yes, in case you’re wondering, Ramsey is my granddaughter and has a personal connection and warm feelings for our family ranch and its animals. She began coming to the ranch as an infant. She’s ridden through its pastures on her horse, Fancy, celebrated her birthday with friends, explored the hills, and enjoyed the scenic beauty of the Texas Hill Country. Ramsey is one with the ranch.

She assumes her role immediately and will, no doubt, improve my earlier attempts to visually represent that about which I write. Her Uncle Paul Plunket provided her camera and its a vast upgrade from her previous one. 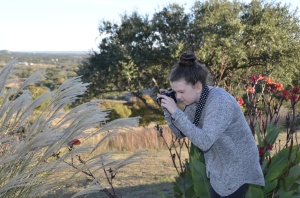 Please welcome Ramsey to this blog. Her photographic skills should enhance the experiences for readers of Views From Medicine Spirit Ranch and my Facebook page.

Incidentally Ramsey Hutton has started her own blog. It’s entitled Ramsey’s Reality and is really quite good. Check it out! 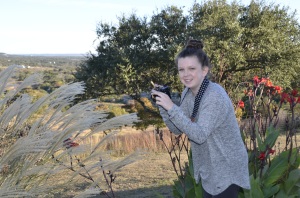 An appreciative reader penned the review below for the Journal of Neurological Sciences. It has been accepted and is now in print online.

While the predominant audience for Carrying The Black Bag: A Neurologist’s Bedside Tales was thought to be a popular audience, the book has also been very well received by physicians, nurses, and allied health personnel.  This acceptance has proved most gratifying for the author as my book deals principally with a humanistic approach to medicine. The author of the book review, Dr. Steve Roach, got it! For this I am most grateful. 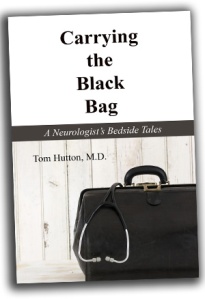 Carrying The Black Bag makes a great Christmas (Hanukkah) gift and can be purchased from Amazon, Barnes & Noble, Texas Tech University Press, as well as your local independent bookstore.

Dr. Roach’s review is as follows:

Thomas Hutton is a retired neurologist whose career spanned four decades. During this time, he witnessed the introduction of computed tomography, magnetic resonance imaging, and numerous new medications. He experienced the dawn of the genetic revolution and the arrival of the electronic medical record. But this book is about people, not technology, so it is fitting that the metaphor Hutton selected for the title of his reminiscences is the traditional black physician’s bag.

Hutton is a master story teller whose patient sketches are reminiscent of those of A. R. Luria and Oliver Sachs. He studied with Luria and duly credits the influence of both men. Hutton intermingles his own story with those of his patients, telling of the football injury that led to his becoming a doctor and his days as a trainee with A. B. Baker. There is even an entertaining medical detective story about a man with repeated arsenic poisoning.

But the heart and soul of this book are the lovingly told patient stories. Never have I read a more poignant tale of love lost than Hutton’s account of Maggie and Ned, two poor migrant workers who had been life-long soul-mates until Maggie’s sudden death. One cannot help but smile at the elderly man who pleaded for relief after his girlfriend developed nymphomania due to her Parkinson disease medication. There is a sweet story about an elderly man who made sandwiches each afternoon for three dogs who came to play pinochle, a complex but pleasant hallucination resulting from his medication. Whether sad or funny, Hutton’s patient stories are respectfully told and never patronizing.

To practice humanistic medicine, one must be in touch with one’s own humanity. Clearly the author has a deep respect for people and a keen eye for the human condition. This is an entertaining book that most physicians will enjoy reading. It also offers an effective antidote for the technology overload of today’s medicine and a glimpse at what medicine once was and could be again. 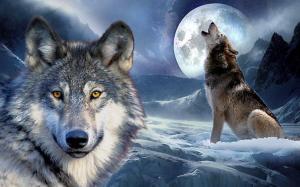 A video in the NY Times from Wednesday, November 8, 2017 got me thinking. The video produced by James Gorman made the provocative statement that wolves may be smarter than dogs. Could this be true?  More precisely the video claims wolves are smarter than dogs at learning the rope pull test. This task is where two animals of the same species have to work cooperatively to achieve success.

The rope pull test is commonly used test to determine cooperativeness among two animals and to compare among various species. The test consists of a tray around six feet long or so that has two tasty treats in plain sight but unavailable behind a screen. The two animals must simultaneously pull on a rope, at the ends of the slide, thus pulling out the sliding tray amd making the two treats available for consumption. As it turns out wolves learn this task quickly and work cooperatively. Dogs not so much. Other species able to perform the task include elephants, parrots, monkeys, and rooks (black birds). Dogs truly struggle with this task but can eventually learn it.

The explanation provided for dogs’ slowness to learn is that they are not used to working cooperatively with other dogs. Yes, dogs work with humans exceptionally well, such as with bomb sniffing, herding sheep, riding surfboards and skateboards, protecting homes, and sniffing out corpses in forensic investigations. But these are activities dogs do with humans, not in cooperation with other dogs. 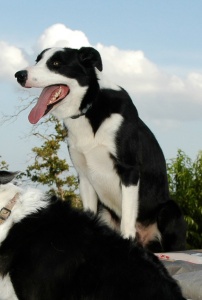 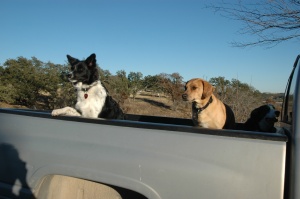 Bella on the left and Little Jack on the right

But this video in the NY Times got me wondering. Are my dogs capable of working together? If so, what can they do cooperatively with each other? I have shared over the years in this blog many examples of my dogs working with me to herd cattle. But this is a task they do in combination with me who is directing them to some extent (at least that is my illusion as de facto leader).

It didn’t take me long to find an example of my dogs cooperating with another dog. Not long after viewing the video I saw Bella, my female Border collie, and Little Jack, our “Texas brown dog” take off on a spontaneous hunting mission. You see, Jack is determined to save the world from what he must see as the scourge of armadillos and squirrels. Just moments before he had spotted an armadillo. After quite a chase, the dogs caught the armadillo. Jack tried to kill it on his own but the armadillo was too strong and pulled out of his bite. Jack held onto the tail of the armadillo and proceeded to ski behind the powerful animal, dragging Jack toward its burrow.

Bella then swooped in went after its head, trying to kill it. Together they managed a successful hunt that neither one of them alone could have pulled off. This hunting duo has killed at least four or five armadillos recently, making them highly effective hunters so long as they work cooperatively. Incidentally they act incredibly proud of themselves, showing extreme excitement and rapid panting after returning from a prolonged absence in which it becomes obvious had been a hunt.

This strikes me quite clearly as cooperation in my dogs. But is it not the only example. I’ve taken to going for a walk for my health most afternoons around 4:00. Not too surprisingly at around this time when usually working at my computer, two dogs will show up at my desk. It can be any two of them.  In tandem they will nose, scratch, whine, and otherwise manipulate me out of my chair. I am then herded unceremoniously toward the door and made available for their afternoon walk.

I have a theory as to why two come at me at a time.  When previously just one dog took on this task, I assumed he/she just needed to go outside to pee and I would promptly put the dog outdoors. They quickly learned a single dog strategy was ineffective. 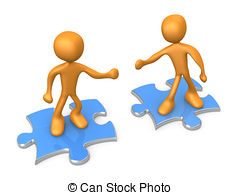 Well there are two examples of my dogs working cooperatively with one another. There are others I will share in a later blog piece. Please dear readers share your examples. I plan a follow up piece and may be able to share your experiences with other blog readers. Let me hear from you!

What’s Happening At The Ranch

We have a new bull at the ranch. Meet Baron. 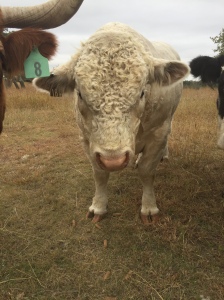 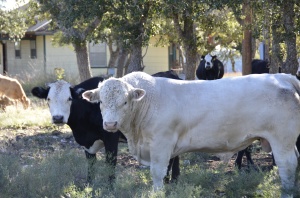 Every six years or so we retire our bull and bring in a a younger, harder working one.

I’ve come up with the name Baron Bull for him. This is easier to recall than his name from the American International Charolais Association which is MR 4M Freedom 185M.

Last week our waiting Black Baldy cows welcomed him to the ranch and he has fit in well. We can expect hybrid vigor with the Black Baldy and Charolais cross. 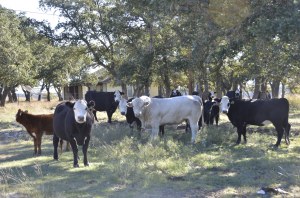 Baron as a name seems appropriate as Baron’s Creek that runs through Fredericksburg and was named after Baron von Meusebach, the founder of Fredericksburg. Also our new bull is out of the Behrend’s (pronounced the same as baron) line of Charolais , so it all seems to fit the big guy.

Trudy and I were mulling over his warm reception by our cows. Given the age difference with the bull being two years old and our cows being two to eight years older than Baron, Trudy and I wondered if we had “Cougar Cows.” But those are ruminations for a later time and after several glasses of wine.

The features most important to me in selecting a new bull are a gentle disposition, good conformation, and fertility. Baron possesses all three. Being gentle is a must as my grandchildren spend time on the ranch, and I am not nearly as swift of foot as I used to be. I checked his gentleness before purchasing him by walking close by him in a pen.  He made no aggressive moves and his prior owner spoke highly of his gentleness. Tick.

Good confirmation is important as we want his offspring to be thick and well conformed as they will sell better. He is muscular, has a straight back, and thick torso. Tick.

Good fertility is a must as the entire crop of calves will depend on it. Baron has been checked twice and found ready to breed. Tick. Results in nine and a half months and more of course will be of greater significance.

He is smaller than our last bull but likely will grow over the next several years. He is thicker than our last bull. Baron already shows wanting to “work” more  than did our old bull who was becoming rather indifferent. As an aside one wonders why it is referred to as “work” but such is the unusual nature of ranching vernacular.

So welcome Baron bull to the Hutton ranch. May your days be long and highly productive. 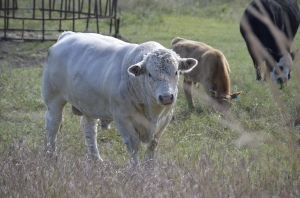