Animal Adaptability, Animals on the ranch, Nutria May 10, 2019 Comments: 5

Not long ago I spied a medium-sized brown animal swimming languidly in my pond. At first I thought the animal was a beaver. How wonderful, I thought, for our stock tank to be a home for a beaver. After all, who doesn’t love those industrious, furry little flat-tailed creatures?

On closer inspection I saw that while the head looked like that of a beaver, its tail was not flat nor paddle shaped but instead bore the look of a rat’s tail. With a little research, I learned the identity of the interloping animal- it was a nutria. 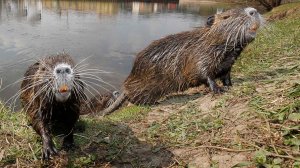 I began to read about nutria. From my reading I sensed an existential dread associated with nutria. I learned it was an invasive species and fully worthy of eradication. For me, a man of peace, the thought of shooting or trapping nutria was hard to accept. After all, I had spent a professional lifetime trying to preserve life in my chosen profession of medicine, such that killing simply doesn’t come naturally for me. Trapping of the nutria also made no sense either, as once trapped what was I to do with the despised animals?

Little Jack does not share my concerns regarding the killing of varmints. He in fact specializes in squirrels and armadillos

Nutria are an invasive species brought to Louisiana from South America in the 1930s. Some 20 animals were transplanted to begin fur farms so that their pelts could be made into hats and muffs. After the craze for nutria fur subsided, however, and the fur mills disappeared, these semi-aquatic rodents scampered and swam into the Louisiana swamps where they bred like crazy. Their initial numbers increased dramatically, having up to three litters per year and up to 13 pups at a time. It is now estimated that in the U.S.A. some 20 million nutria exist and are spreading out from Louisiana in a rapidly expanding rodent infestation. Texas is affected, your state may also be impacted or else may be soon.

Already nutria have spread to the northwest portion of the U.S. and as far as California. In California the threat they pose to the wetlands is said to be equal of the threat that wildfires have for the State.

What makes nutria so feared is that they eat water plants, both root and stem. Nutria will completely destroy water plants , creating an ugly “eaten out” and useless body of water. They are destructive little beasts with voracious appetites.

One of the stranger features of nutria are their stubby orange hooked front teeth. The orangeness comes from the dental enamel that makes nutria easily recognizable. They look to have been drinking Tang. Anyone remember this drink?

The dramatic increase in the number of nutria along with their wholesale destruction of aquatic plants in the bayous and estuaries of Louisiana led in 1958 to a bounty being placed on thm. Louisiana paid $5 per tail for the nutria. Over time the bounty system led to a reduction in their numbers. Nevertheless, the remaining tail-less carcass often was often thrown into the water, reducing the water’s oxygen content and negatively affecting the fish. This consequence led folks to question whether the nutria’s lean protein source could be used in some other way, such as a source of food. Might some other practical use for nutria be found?

Admittedly, the idea of promoting and selling nutria as a meat source has proved challenging. The critters have mistakenly been called “river rats” rather than the rodents they truly are. Who would wish to eat a rat? Nutria actually are more like squirrels which in some parts of the country remains a food source. Various chefs have come up with dishes using nutria. Nutria spaghetti casserole has been suggested and nutria meat has been mixed with pork to make sausage. It also has been used in dog treats.

Despite the influx in recent years of nutria into the State of Texas, to my knowledge no bounty system has been established at least in our County, nor have I seen a nutria dish on the menu of any restaurant I frequent. If nutria are to be controlled either a bounty or some practical use will need to be found.

Not long ago I asked my lovely wife, Trudy, if I were to shoot a nutria if she would cook it? Her disgusted look spoke volumes. I didn’t even make it to the part in my spiel, saying how it was gluten-free and low in cholesterol. No, I can’t see nutria or even squirrel being served at the Hutton house any time soon.

A company in Louisiana has also tried to push the use of its fur again and calls its product “righteous fur.” It has lined mini-skirts and has been fashioned into neck wraps. The orange nutria teeth have also been utilized in jewelry making. I don’t know if any of these practical uses for nutria products will catch on but without some practical reason to hunt or trap this critter, I fear for my home State of Texas. I also worry as well for other States and worry for the rest of our country as to what is yet to come. Beware, the nutria are coming, the nutria are coming!

Do the readers of this blog have problems with nutria where they live?