It’s a sad day on the ranch. Buddy’s walking, continence, and comfort level continued to deteriorate. This dog who was born on our ranch (in my closet actually), herded the cattle with great skill, miraculously broke up bull fights, and has now died on this ranch will be missed. Buddy’s pain led to mournful yelps these last weeks. But he died surrounded by his pack of dogs and humans while proudly overlooking his domain from his station in the back of the pickup. I feel compelled to write this sad note for all who knew Buddy personally and for those of you who knew him only through this blog. He was quite a dog!

By this morning the dark clouds of Hurricane Hanna had spread over south and central Texas including Medicine Spirit Ranch. No moisture has fallen to the ground as yet from the gray, ominous clouds, in contrast to that on our cheeks. Just after being laid to rest in a grave beside his mother, Mollie, the sun briefly broke through the dark sky, illuminating his still body like a spotlight. Interpret that as you will. Buddy died peacefully and at a time that was appropriate.

Buddy’s incredible herding skills moving cattle will be remembered. But even more so, we will miss his love for family. His bravery in the face of large animals was unsurpassed. He was the most loyal being I’ve ever known. For reasons known only to Buddy, he sought me out wherever. He was my constant companion. He laid beside me in the bed for six weeks when I was recovering from my own back injury. He was aptly named.

Perhaps such devotion, if in a human, would be seen as cult-like. Nevertheless, I cannot help but feel flattered by his allegiance and devotion to our family. Of course this is a Border collie trait, but Buddy showed this behavior in spades.

Buddy will be missed. What a dog! 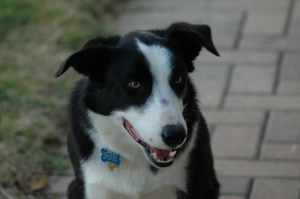 Buddy as a younger dog. That’ll do Buddy.