Norman’s Emancipation- So Why Does It Feel Like Rejection?

Of late I’ve written extensively about Norman, our bottle fed calf who was rejected by his biological mother in favor of his heifer, freemartin twin. 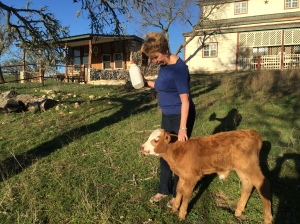 I feel my story may have reached its denouement. It’s inevitable, I suppose, but surprising by how soon it happened. After two months of twice daily bottle feedings, to Trudy’s and my surprise, Norman has begun to rebuff our feeding efforts. His action has been not so much stiff-arming us but rather a polite demurral. He still saunters over and allows us to scratch his neck and ears and he continues to gaze at us with his dark eyes with long, curly eyelashes that Madonna would kill for. Nevertheless, he has been refusing to take hold of the nipple despite our best cajoling. This has proved surprising and concerning to us as prior bottle fed calves have continued to take a bottle for many more months.

When the herd realizes we’d not come to offer them range cubes (think cow candy), they soon return to mowing the pasture and graze away. Norman, observing their departure, has been turning away from us, responding to the strong social draw of the herd.

One evening several days after once again being rebuffed by Norman, Trudy and I stood in the pasture holding our still full bottles of milk, feeling full of rejection. We both worried about Norman lacking sufficient nutrition to sustain himself.

It was then we observed a nearby cow who had been keeping a keen eye on Norman and us. Nearby was her white calf of four or five months of age. We soon saw her calf meander up to her and latch onto a full udder for his evening feeding. Shortly after this occurred came a  more surprising sneak attack occurred from Norman. He approached between mama cow’s hind legs and began to feed earnestly but on a less impressive hind teat.

The reader needs to understand how rare it is for a mama cow to accept a calf for feeding that is not her own. Nevertheless, there it was before our eyes- two calves, one her own and one adopted, suckling away.

Trudy turned to me with an expression one part surprise and one part relief. Our bottle calf was no more. Over the last week we’ve observed Norman feeding from this cow several times. While he only merits “hind tit”, he chooses his lowly feeding station over our carefully mixed and precisely warmed calf formula. 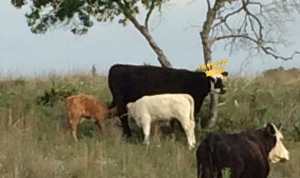 To be sure, Trudy and I welcome the extra hour in the morning and in the evening and not having to prepare the formula, seek out Norman, feed him his gallon of milk, and cleaning the calf bottles. Nevertheless, we are left with an “empty nest” feeling like when our children left home to go off to college. It’s only natural of course that Norman become a full member of the herd and attends fully to his cattle herd and less to his humans. Our heads get it. But our hearts feel pangs of rejection.

Whether or not this is the end of his feedings or he will require only occasional supplementation will be determined. When Norman is bigger, I might just carrying range cubes in my pocket and slip him an occasional treats. He still feels special.

Recently I’ve written about a set of twins born at our ranch. The mother cow unfortunately promptly rejected the bull calf in favor of the heifer calf such that Trudy and I soon became surrogate parents to the bull calf. We have been bottle feeding him twice a day. Well at least we don’t have to throw him over our shoulders and burp him!

While cattle twins are rare, We’ve learned the concept of freemartinism in cattle. This occurs when a male calf (Norman in our case) and his female twin are born. The heifer usually has an abnormal reproductive tract. Her abnormality occurs due to the presence of male hormones in the bloodstream in utero that prevents normal development of the ovaries and/or other aspects of her reproductive tract.

The freemartin becomes an infertile cow with masculinized behavior (someone else will have to share exactly what this behavior looks like as I haven’t noticed any unusual spitting or scratching (thank you Ann Richards for the quote). A freemartin occasionally occurs in sheep, goats, and pigs.

The Roman writer Varro described freemartins and referred to them as “taura”. John Hunter, an 18th century physician, determined a freemartin always has a male twin. Talk about creating sibling grudges!

The question arises whether this condition might occur in human twins as this has been claimed in folklore. This belief was perpetuated for generations and was mentioned in the early writings of Bede. No good support exist for freemartins in human twins to the best of my knowledge. If others know differently please share your thoughts and level of support for this. 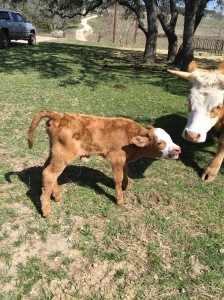 Norman and a big friend

Am pleased to share with you that Norman is growing and appears healthy. Another mama cow has allowed Norman periodically to nurse. Likewise his sister does well and continues to enjoy the mothering offered her by her biological mother. As for Norman he spends time in the nursery with the other calves during the day, scampers toward Trudy and me when we approach him, and like his ears and neck scratched.

Norman’s twin (the freemartin) is destined to become a beef calf rather than for breeding purposes. If I don’t watch it, Norman may, if Trudy has her way, end up as a big backyard pet. 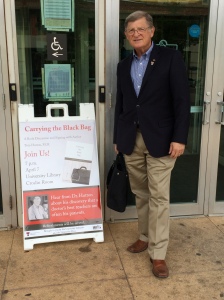 I enjoyed a busy week recently in Lubbock speaking on their NPR station at Texas Tech University, at an event at the Texas Tech University Library, to a private book party entitled “A Celebration and a Conversation” kindly hosted by Judy Wilkins and La Nelle Etheridge, and to the Lubbock Roundtable. Wow, each was a lot of fun. The comments on my book, Carrying The Black Bag, proved very positive and I enjoyed the interaction.
Below I’ve shared a couple of pictures from the library presentation and a very nice video provided by the library. Should you wish a similar talk to your organization, please contact Trudy, my wife, who keeps the schedule (don’t they always). Her email is trudy_hutton@yahoo.com 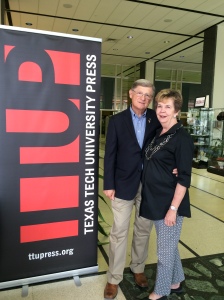 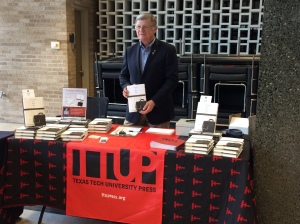 Here is the link to the presentation at the Texas Tech University Library: 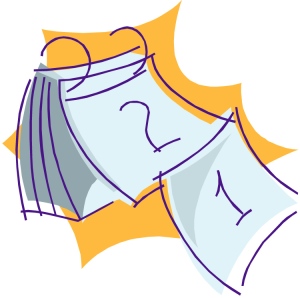 Looking forward to several book related events this week in Lubbock. Thursday morning I’ll tape a thirty minute program for Dr. Tom McGovern”s radio program that will play on the Texas Tech University NPR station. Dr. McGovern is a fine Ethicist and a wonderful human being whom I always enjoy being around and learn from.

Then on Thursday evening at 7 pm I will be presenting at the Texas Tech University Library on my book, Carrying The Black Bag: A Neurologist’s Bedside Tales. The event is open to the public.

Friday evening my good friends Judy Wilkins and La Nelle Etheridge are having a “Celebration and Conversation” event where I will speak about my book to their invited guests. This is such a generous invitation and one I’m greatly looking forward to.

Then on Saturday morning I will again share stories from my book at the Lubbock Roundtable at 11:00 at the Hillcrest Country Club.

I feel fortunate to have been asked to give numerous book talks since Carrying The Black Bag came out three months ago. These are all fun events. I particularly enjoy gaining feedback from folks whose lives have been impacted meaningfully by my book and from learning their stories. Let me know if you would wish to schedule me for a book talk and Trudy and I will try to make it happen.

If you are in Lubbock this week, hope to see you at the TTU Library Thursday night or as Charles Osgood says, “I’ll see you on the radio.”

I recently described here my shock at finding a rare set of newborn calf twins and being still more shocked when the mama cow refused to allow the tiny bull calf to nurse. Knowing this was not an unusual circumstance with beef cattle twins and previously having bottle fed calves, Trudy and I swung full force into action with store bought colostrum and powdered cow’s milk.

A nameless baby bull calf and his heifer friend

We determined the calf needed a name, but what should we call it? We typically don’t name those destined for the livestock auction, but in this case a handle shorter than “the bottle fed bull calf” was needed.

Since posting that story I’ve heard from “Rowdy’s Mom” who suggested the name, OLLI. Rowdy’s Mom  until recently was the very capable director of the Osher Lifelong Learning Institute at Texas Tech University, hence the acronym “OLLI” and her understandable affection for the name. As an aside, She also is most responsible for cajoling me two years ago into helping to establish a branch of the OLLI-TTU in the Texas Hill Country. Thanks Emma for all your wonderful help and my arm has almost recovered from your persuasion.

Despite her’s being a very good suggestion, by the time we received it another name was already being  used.

Have you seen the movie, City Slickers? This humorous movie starring Billy Crystal depicts his character and two chums (all New York City slickers) at a dude ranch improbably herding cattle via horseback from New Mexico to Colorado. During the long trail drive, a mama cow gives birth to an adorable calf they call Norman. Billy Crystal’s character is forced to rescue the calf from a surging river, he bonds with it, and quixotically packs him home in a crate to join his family in the city. The calf in the movie looks very much like our bottle fed calf and, you guessed it, we call our calf- Norman.

The feeding of Norman twice a day has become a regular staple of ranch activities. Betty and Cecil Selness, great friends from Minnesota, recently spent time with us and became regulars at Norman’s feedings. 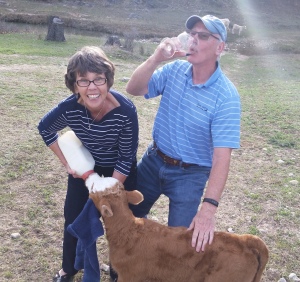 Grandson Graham spent part of his spring break at the ranch with fishing, horseback riding, gator driving, and hikes on the agenda but his favorite activity above all others was feeding Norman. Graham also learned how hard a baby calf can buck against a bottle when the milk doesn’t come out quickly enough. 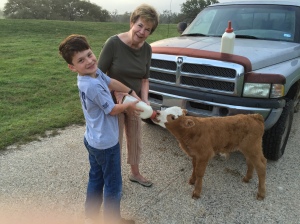 Needless to say, Norman has frolicked and suckled his way into our hearts. It’s hard to spend so much time staring into Norman’s appreciative dark eyes and not develop a bond of affection. In a year when we need load him into the cattle trailer for the one way trip to town,it will be a sad day indeed.

In my next post, I’ll share what I’ve learned about bovine twins of different genders and the concept of freemartins. Please let me know if you’ve had similar experiences and, if so, what you learned, especially about yourselves. For now you can think of Trudy and me as Calf Mama and Calf Papa.