Category Archives: A Place In The Sun

Buddy’s Place In The Sun

Many years ago I read The Good Earth. Pearl Buck wrote this magnificent book in the early 1930s and won a Pulitzer prize in 1932 for it and received a Nobel in 1938. The story covers multiple generations of a Chinese family- a family that had to struggle against all types of external and internal challenges. Particularly vivid in my memory is the book’s ending where the old Chinese grandfather, who having run his race, retires to his comfortable chair, occupying his richly deserved place in the sun. He sits remembering and enjoying a deep sense of satisfaction from his long efforts.

I am reminded of this daily when I observe my thirteen-year-old Border collie, Buddy, and his aging behaviors. Due to infirmity he wisely retired from herding cattle over a year ago. I wrote the story, Buddy- The Slacker early on but did not get around to posting it until March 30 of 2018. In the story Buddy is only a half-grown dog but amazingly manages to break up a ferocious fight between two huge bulls. After so doing, he ran the neighbor’s bull off and then returned our bull unassisted through a forest and around rocks and streams to our ranch. This proved to be the single best herding achievement by a dog that I’ve ever witnessed. After witnessing this event, I no longer referred to the half-grown Border collie as Slacker.

One days several years later I was unaware of a Longhorn cow sneaking up on me while I fiddled with a difficult gate. Buddy saw the approaching cow and easily could have sped off. Instead he stood his ground, short canines against very long, heavy horns. The cow thumped me many times before Buddy helped to drive her back. I can think of no better example of Buddy’s loyalty.

While Buddy no longer herds, he still enjoys riding around the ranch in the back of my pickup. I must lift Buddy up and into the bed of my pickup to gain his rightful place of honor. His old gray snout becomes animated when riding in the back of the pickup and surveying his ranch. His ears perk up, his dull eyes become livelier and dart from object to object, and he stands erect and proud as if for a few moments his joints no longer pain him. He points his nose into the air and listens as intently as his old ears allow.

It’s my ranch and I still look out for it.

Because of his advanced age, Buddy has largely stopped going on walks with Bella, Little Jack, and me. He will usually await our return while waiting patiently beside my pickup that in the driveway. The effort to take a walk on his painful limbs must have simply become too great, I suppose, and he has taken this commonsense approach.

Buddy has multiple beds in the house which is only appropriate because the majority of his day is spent napping. He has a doggie bed in the study where he keeps track of me while I distractedly click away on my computer. Buddy has another bed “in his office” located in a corner behind a screen where he monitors the goings on in the living room. Buddy also has a doggie bed in our bedroom where he catches many a daytime nap.

Enjoying the warmth of the sun and a good nap

Buddy frequents all of his sleeping spots at various times during the day. These spots have something in common; each allows him to soak his aging bones in the warm sunlight streaming through nearby windows. Buddy migrates from spot to spot to capture the healing sunlight. I like to think this warmth provides pain free rest periods. These doggie beds, I believe, are Buddy’s places in the sun. 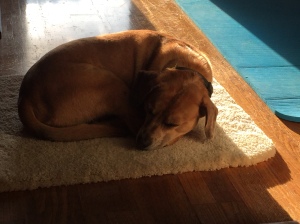 Hey, don’t forget I also like to lay in the sun.

I sometimes observe Buddy dreaming with his legs making running movements. His whiskers shake and shiver. I, of course, have no idea what he dreams about, but I hope Buddy is reliving his best herding memories and summing up his many adventures. I know that at age 13 (or 91 in dog years), Buddy won’t be around much longer. i can hardly bear to think about losing him.

Buddy was born on the ranch (actually in my bedroom closet) and has barely left the outer reaches of the ranch. He models stoicism and provides more unconditional love than we can ever hope to return.His loyalty and desire to protect his people goes beyond question.

During this wonderful holiday season, the thought occurs to me that God’s love for all his creatures is, in small part, represented by our dogs love for their humans. For this let us give thanks and offer in return unconditional love.

Dream on Buddy, my loyal companion. You’ve earned your place in the sun.