Hay’s In The Barn

How affirming those words, “hay is in the barn”.  Have you ever wondered how hay is cut and baled? We cut our hay fields this week and baled both round and square bales. Below I share the process of carrying out this important ranch activity.

Two months ago our fields were brown and dusty. After our lengthy drought the fact that we obtained a cutting at all is fortunate. The process began two months ago.The rains this year came at the right time, namely just after we had fertilized the fields and then subsequent rain was well spaced till harvesting. 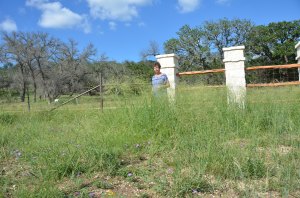 Being a small operator, we don’t own the cutting, raking, and baling equipment. Instead I hire someone with equipment and pay a per bale charge. The charge for cutting and baling our hay is substantially less than buying it, especially so during our recent drought years. 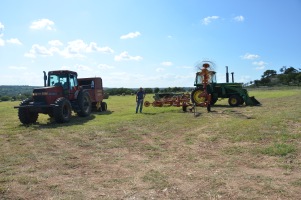 Yours truly with baling equipment

When the hay has grown and begun to head out, the tractor pulls the cutter through the fields and lays it down, much like a giant scythe. The hay then needs to dry for several days. Because of the threat of rain this year, we baled the Klein grass into bales before it had completely dried. Once the hay was cut and dried, the tractor pulled a giant rake through the fields, creating a large snake-like furrow of hay. Next the tractor pulled the baling machine through the field and picked up the rows of grass,  turning it into thousand pound round bales or sixty pound square bales. The machine amazingly ties the bale tightly with twine or wire to hold it in place. 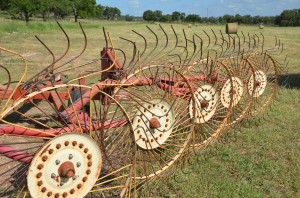 Given the higher than normal moisture content of the grass this year, we will leave the bales in the field for a week or so to dry before moving them to the hay barn. This interval diminishes the chance for spontaneous combustion. Yes, instances have occurred where barns have burned down due to prematurely enclosed hay bales. 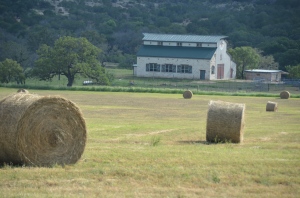 Next week we will move the bales (both the large round ones for cattle and the smaller coastal square bales for horses) to the barn to store for the winter. Placing  the hay in the barn is a particularly satisfying time, knowing the animals will have ample hay during the non-growing season.

Prospective consumers of our hay

The date we sell our calves at auction is the best day of the ranch year–it is also the worst. How can this be?

As anyone knows who has been to the grocery store lately, beef prices are high. This reflects in the prices ranchers receive at the sale barn. Last week’s prices for a load of six calves were our personal best. We received about twice the usual price (this is a good thing as cattle ranching for a long time has not been profitable). The sale is the payoff for a year of raising the cattle, vaccinating them, castrating the bull calves, being a careful steward of the herd, putting out hay during the winter, carefully managing the pastures, and dealing with any veterinary problems that come up. The rancher obtains a bonus for quality as well as existing market conditions. We feel this year like we hit the jackpot! 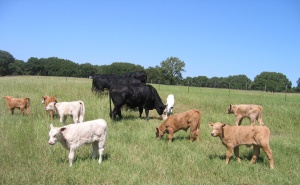 I enjoy hooking up the cattle trailer, loading the calves, donning my Stetson and proudly driving to the sale barn. This provides a fitting finale to the year’s hard work.

While sale day makes for the best day of the ranch year, parting with our calves is bittersweet. Frankly it hurts to send our critters away. After all, these are the baby calves that were once so cute, and we watched gain for the first time their wobbly feet. They entertained us with their joyful scampering, insatiable curiosity, and calf games. A few calves we have had to bottle feed when their mamas were unable or unwilling to act as the milk bar. Anyone who doesn’t bond with these hungry little fellas with their big brown eyes and who suck so vigorously at the bottle must, in my opinion, must have thwarted emotional development. There is something about their appreciative stares as they drain the giant milk bottles. 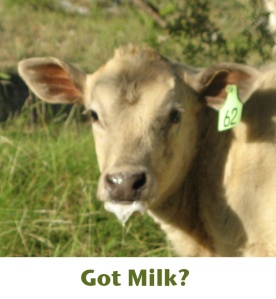 We remind ourselves at sale time what calves are raised for. They are not endangered species and are raised to feed people. As a ruminant, they have the amazing ability to convert grass into a nutritious meal. By the time we sell them, they have grown to 500-600 pounds and aren’t nearly as cuddly as they once were. This helps. Also assisting the separation is knowing they will go on to feedlots for another three to six months and eat all they want and fatten up before rendering up their steaks, hamburger, and fajita meat. Knowing others will benefit from the nutrition they provide and enjoy a tasty meal helps as well.

So sale day brings about mixed emotions for us. We appreciate the payday but suffer a tinge of sadness sending off our calves. We hope one day you will enjoy some exceptional beef from Medicine Spirit Ranch.