Editor’s note: This is the second part of Little Jack’s dictated story. I hope you enjoy it. Also Jack asked me to thank his fans for their emails and words of encouragement.  When he said this, his tail was wagging broadly and he sported a giant canine grin. 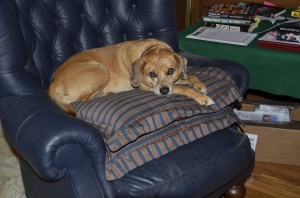 Little Jack, also known as Scrapper, dictating his backstory. Note he lays on two pillows- a long way from his days when on the road

It wasn’t long after Eddie’s departure for college that I overheard his parents talking about a trip to visit one of her littermates. Actually I may not have understood the whole event at the time but filled in details later. I know that I understood “go” and “car”- two words quite sufficient to excite me. At that time I was still learning to understand more complicated human speech.

I sat licking my paws just to have something to do when the important conversation between Eddie’s parents occurred. Initially I had a glimmer of understanding but that soon grew into a full-fledged idea, much like when chewing on a bone in the dark and becoming surprised to discover residual meat on the bone.

You see, I vaguely remembered from where I had come and held a strong desire to visit there again. Haven’t you had this feeling? My birthplace may not have been perfect, yet I recalled it as nearly so. Eddie’s parents became more purposeful that week and began to pack their suitcases. I became increasingly excited over the prospect of going on a car trip.

I displayed my excitement by repeatedly scratching to go in and out the backdoor of our house, a behavior that seemed to irritate Eddie’s parents. Wasn’t that what back doors were for? I must admit that I become frustrated by how slowly humans move. After all, once I had my collar on, I was packed and ready to depart!

One morning my sluggish human companions finally began loading their suitcases into the car, grabbed up my sack of dry dog food and bowls, and climbed into the car that made the droning sound. I didn’t have to be called, as I had already bounded onto the backseat of the car. No way would I be left behind. 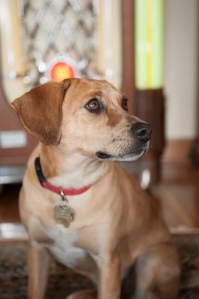 No way are you leaving me behind. Note tags that jangle.

We headed out of that busy, smelly city and drove into the countryside. We drove for a long time. Eventually the flat plain fell behind us, and the land turned hilly with gurgling creeks and streams. I kept my nose pressed against the window, panting the whole time. By the end of the trip I had nose prints covering that side window.

The number of cars and trucks on the road gradually grew less. The air became fresher and more fragrant. I smelled flowery smells, the earthy smells of cattle, and the sweet fragrance of freshly turned soil. Those smells I recognized and they pleased me and made my tail wag. This all had an uncanny familiarity for me. These scents not only were familiar, but they also tantalized my nose and made it twitch.

We eventually arrived at a cattle ranch just west of Fredericksburg. The trip seemed to take a long time, perhaps because I was much too excited to sleep. I rode in the backseat with my tail striking the back of the front seat. I think my thumping tail on the back of the seat and the jangling sound of my tags from scratching had aggravated the man, as during one of the car stops he removed my collar. It just didn’t take much to irritate him. For me I like the sound of jangling tags, except of course when I am stalking a squirrel.

Ahead of the car appeared a beautiful, bright sunset, as if beckoning me home. I panted with excitement. I could barely contain my excitement. I felt at one with this countryside; a completely different feeling than for the big city.

Soon I’d be free to run around in a big yard and go free without that wretched leash. I was one happy, excited dog, although I knew a visit did not mean forever, and it would end far too soon.

Admittedly, once back in the country, I gave thought to running away from the ranch. I feel guilty for even admitting this. I had several opportunities when I could have easily slipped under the barbed wire fence and have taken off to explore surrounding ranches. Nevertheless, leaving my food bowl and more importantly, deserting my humans kept me from doing so.

Hadn’t Eddie asked me to look after his parents? And what about chasing off those pesky squirrels in the yard? Those taunting squirrels might just overrun the place without me!

Ultimately the day of our planned departure for the big, stinky city arrived. At the time I rested under a tree next to a stream not far from the house. From there I watched Eddie’s parents straining to carry out their suitcases. I heard Eddie’s Dad call out for me in his deep voice.

“Scrapper, Scrapper, time to pack up the car and go! Come on Scrapper.”

I considered turning my back on him and heading off in another direction. I felt a tug between my feeling of oneness with this country that felt so right and my loyalty to my family from the big, smelly city. They weren’t much of a family, mind you, but loyalty is loyalty, and I am a very loyal dog.

“Hurry up Scrapper. It’s time to leave. Load up now!”
Both Eddie’s parents were calling. Their pitched voices sounded sorrowful, as they repeatedly summoned me. As if my own will had been stolen from me, I stood up, arched my back, stretched, and trotted back toward the yard. Once there I feigned a happy side-to-side tail waggle and jumped through the open back door into the car. Eddie’s father smiled.

I can’t fully explain how I felt about this situation except to say, I was hesitant to leave. Still I was loyal, and they were my human companions. Eddie’s father stuck his head in through the backdoor and removed my collar and tags for the trip. I settled in, awaiting the final packing of the car, expecting to hear the trunk slam shut at any moment.

It was then that something entirely unexpected occurred, something so thrilling, so galling that it would change the course of my young life. I saw a black, four-footed animal with what looked like a black mask, scurrying across the lawn. It had dark, evil appearing eyes and an alternating black and white striped tail. I caught a whiff of it and the animal cast off a different scent from any animal I had ever smelled. I had never experienced a raccoon before, but I was pretty sure it held evil, vile intentions and required my dealing with it. I needed to defend the house and my people from this disreputable predator. I raised myself up and launched myself out the open door. I took off at full speed, racing after the intruder. 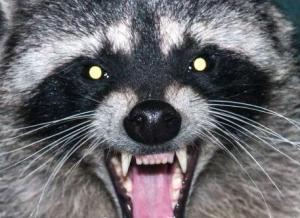 The raccoon saw me coming, turned tail and lit out. It ran under the fence and scurried into a nearby woods. I dove through the fence, raking myself on the barbed wire in the process. One must sacrifice when pursuing bad animals. I could run faster than could the raccoon and rapidly closed the distance between us. What I didn’t realize was how good the masked one would be at hiding. He had a regular disappearing act. Several times I overran that sneaky raccoon, as it hid behind trees and expertly concealed itself in low spots. I had to place my nose to the ground several times and retrace my path in order to pick up its distinctive, musky scent. Having found its trail, I followed it. Repeatedly I jumped the raccoon, and each time it raced off with me in close pursuit. 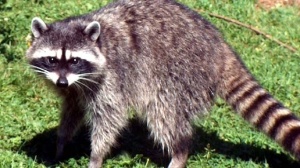 What I failed to recognize at that time was how my pursuit was leading me farther and farther away from my city family and the car that made the droning sound. During the frantic chase, I seemed to lose all track of time. Oh what fun I was having!

After considerable time had passed, I looked up, surveyed the area for familiar surroundings, and failed to recognize where I was. I began to make a large circle, surveying the area. Nothing at all looked familiar. I was lost. I felt confused and for the first time in my life, I was entirely alone. Let me tell you that’s a pretty scary experience for a small, young dog.

I spent the rest of the day, searching around for familiar landmarks and my people. But by then I had lost all sense of direction. I cocked my ears up and heard no telltale sounds. Time passed. Finally the sun began to set behind some distant hills. The air temperature dropped. Fortunately my fur coat keeps me warm unless the temperature gets really low. Tired by this time, I lay down in an earthen crevice beside a stream and began to assess my situation. I licked my wounds where I had earlier scraped myself bolting through the barbed wire fence. I considered my options. It didn’t take me long to realize my circumstances were not good, not good at all.