Doc, our roan gelding, and Fancy, our paint filly, failed to show up for their morning meal several days ago. While not entirely novel, Doc does love his food and hasn’t missed many meals.

The next morning in front of our home I found Doc lying on the ground. Beside him stood Fancy, alternatively looking from Doc to me. She appeared anxious.

Fancy acted as if she knew Doc was in serious trouble. The horses had made it to where they knew I would find them. Doc had been in obvious pain, as he had rub marks on both sides of his head. He was weak, shaky, and initially could not regain his feet.

With prodding Doc stood up and walked slowly to the barn, a distance of three quarters of a mile. There we loaded him into the trailer and I drove him to our vet’s clinic.

Fancy wanted to go too.  She followed Doc to the barn and had to be haltered and tied to the hitching post or else she too would have climbed into the trailer. This was no surprise as she has been utterly devoted to the big roan ever since her arrival at our ranch. 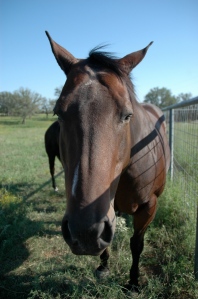 Doc will be missed

Unfortunately my story doesn’t have a happy ending. We learned Doc had colic, likely resulting from a twisted colon. He was suffering. At his advanced age his chances of survival, even with major surgery, were not good. His heart rate continued to be high despite three times the usual amount of sedation and pain medication– his elevated heart rate reflecting his discomfort. Unfortunately, after learning the limited options, we had to put him down. Talk about a painful decision to have to make.

All that day Fancy had stood waiting at the gate through which Doc left the ranch that morning. She continued to gaze longingly down the road, waiting for Doc’s trailer to return.

When finally I drove the pickup and trailer onto the ranch, Fancy followed it at full gallop. She ran around the trailer with mane flowing, nostrils flared, and tail held high. She circled excitedly behind the trailer, looking within it. Not seeing Doc, she shook her head, and headed off to a nearby pasture.  Fancy appeared agitated.

I’m certain Fancy missed Doc and showed signs of her grief. I am worried about her. Animals are capable of showing affection, grief, and longings, as do humans. Admittedly, I have never viewed great affection between horses and their human companions, at least not like I have between dogs and humans, but today I witnessed clear signs of affection between a filly and a gelding.

We have been trying to console Fancy. She has received extra attention and treats. We even had a horse from a neighboring come over for a visit. Fancy and Trooper  enjoyed each other and his visit seemed to raise Fancy’s spirits. We hope Trooper will return.

Fancy isn’t the only one who will miss Doc. He was a good and gentle horse. I traveled many a mile on his broad back. My favorite memories of Doc are with children astride. Doc was a great child’s horse. Even in his later years when his arthritis caused his retirement from trail rides, Doc would accept children to sit on his bare back. There the children would pat the big horse and view the world in what I hoped was from a different perspective. Doc received vast amounts of carrots and apples from appreciative children who would come to Medicine Spirit Ranch mainly for the purpose of seeing him, patting him, and feeding him.

One teenage neighbor girl who used to ride him regularly in his more active days was once spotted lying on his back, sound asleep. Doc was so gentle he would not move without his rider urging him to do so. What a peaceful memory!

We are left with only our memories of Doc, as he has departed Medicine Spirit Ranch for his Celestial Pasture. Let’s hope he finds laughing, excited children to sit astride his broad back. Doc would like that.