Almost every morning lately I’ve spotted a Great Blue Heron majestically fly in to our stock tank while I’m feeding our ducks. 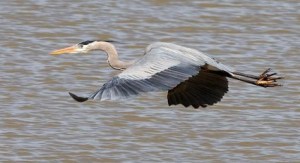 With its long wings beating slowly and deeply and its legs trailing behind, it swoops in and lands 50 yards or so away from me. There it watches my actions closely. It’s a magnificent bird and the largest of the North American herons. The images here were taken from the internet, as our heron appears to be camera shy. 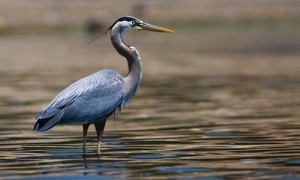 The Great Blue Heron is highly adaptive and lives throughout North America. It is abundant throughout Texas, especially along the coastline.

After completing my feeding tasks and retreating back to the pickup, I see the heron on its long, stork-like legs stride to where I’d stood only minutes before. I’d initially assumed the heron was competing with the ducks for the food I’d left on the bank. Later I realized the heron’s real intent.
The Great Blue Heron slowly stalks to the edge of the water, crouches its four and a half foot tall, lanky body down into a compact position with its belly touching the ground. At this point it stands no more than a foot high. It folds its neck back onto its body and waits, and waits, and waits…. It reminds me of a coiled spring. It crouches obscured in part behind tufts of tall native grasses and next to the pond. As I observe its hunting pose, I feel the tension steadily rise within me. After watching motionless and with only a rare flickering of a feather, the Great Blue Heron, like lightning, unleashes itself forward. In less than a blink of the eye, it snatches a fish from our stock tank.

The heron then struts away from the water, drops the fish on the bank, rearranges it, grabs it up and downs the fish in one big, satisfied gulp. It seemed to give a nod in my direction, though I might have imagined this. 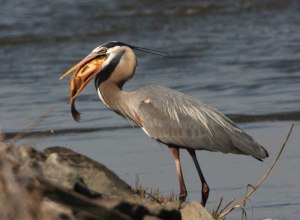 Imagine my surprise. I’d never dreamed I was chumming for the benefit of a Great Blue Heron!

2 thoughts on “Chumming For Heron”