Lately I’ve been thinking a lot about love. And when I say this, I mean with its many facets. Strangely this began when our daughter Katie and her dog Olive visited last weekend. Olive does not appear as your typical dog. Olive looks like a dog put together by a committee. As best we can determine, she has German shepherd and either Corgi or Basset hound in her background. Olive is a very sweet and a good natured dog but one that elicits gasps and startled comments, such as “Oh my gosh, what is it?”

Olive has the face and head of a German shepherd but possesses a low slung body with front paws that angle outward at nearly 45 degrees. Now how exactly a German shepherd and a short-statured hound got together, I don’t know. My guess is the German shepherd mother got drunk one Saturday night and fell into a ditch- then along came Daddy. 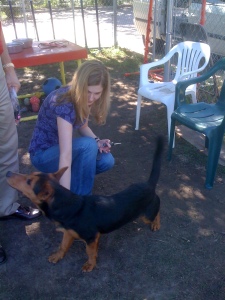 Another reason for my recent fixation on love is that I have been reviewing chapters from my unpublished nonfiction book (tentatively entitled The Man Who Played Pinochle With Dogs). One chapter describes an elderly lady with a massive stroke who EMS brought to our emergency room. Initially we didn’t even know her name but determined from the CT-scan that the brain hemorrhage  gave her a very low chance of survival. The  woman physically was in very poor shape and not much to look at. Her hair was stringy and yellowish, finger nails grimy, skin fissured and aged, and she looked malnourished. I must admit at that point, we looked at her more as an old lady with failing physiology and decrepit body than as an individual with particular wants and loves. In our defense we had nothing else to go on.

The next day Ned, her octogenarian husband, with mincing steps walked into our medical intensive care unit and filled us in on her background. Ned not only gave us factual information about her health, but also absolutely changed the way we thought about this woman. We learned that both husband and wife had spent their lives as migrant workers. The had met as children at the end of a long cotton row and later started a common law marriage. Neither could have been described as anything but common in appearance. They had little in the way of worldly possessions and possessed little education. They had no children that might have cemented their relationship. Despite this  rocky foundation on which to build a relationship, their love had thrived.

It soon became clear to us just how much in love they had been. They never had been apart in all their years together. They worked hard, looked out for one another, and moved about together following the crops. The husband was absolutely devoted to his wife, a woman in the story whom I refer to as Maggie.

Whether it was Olive’s speculated upon parents or this pair of octogenarians, love always seems to play a central role for all of us in our lives. Whether it was simple lust as I suspect with Olive’s parents or a deeper, longer, and more meaningful love as with my memorable couple that love provides tremendous importance for our lives.

As I review my medical stories, how often I find an underlying theme about some aspect of love. It enters in the form of caregiver sacrifice, spousal love, love of a parent for a child, or love among unlikely and inherently unlovable people. Love often becomes the engine of transformation in my creative nonfiction stories. The stories also underscore the affection doctors and nurses develop for the people they care for.

Medicine is a calling like no other. I am fortunate to have experienced not only an education in medicine but having medicine provide for me a greater understanding of human nature, human strivings, and human fallibilities. Thank you Maggie, thank you Ned for helping me to understand a bit more about love.

2 thoughts on “Thoughts On Love”