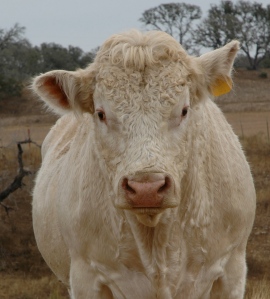 Curly is a bull. More specifically Curly is our four year old Charolois bull. He has an interesting personality quirk. Ever since we bought him when he was eighteen months of age, Curly has acted differently from our prior Charlois bull or from leased bulls who have visited our ranch. You see, Curly bonds and bonds strongly with the occasional calf.

Initially I assumed the togetherness came from occasional young bull (steer) calves as they followed Curly about the pasture. Curly after all is a big bull weighing about 2000 pounds and clearly has his way in the pasture. Young bull calves might have looked up to the big guy and have wanted to learn from the alpha male. 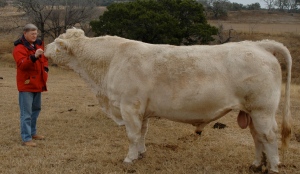 Curly Is A Large Charolois Bull

Later when we isolated two steers to feed them out (don’t share this with Alissa, my tender-hearted daughter-in-law, the teacher, whom I told these were special calves rewarded for exemplary behavior with special feed and private pasture). Curly would daily wander away from the herd and head straight for the pasture where the steers were kept. There he would hang around for most of the day at times foregoing the feeding of the herd with range cubes. He would nuzzle the calves and lay contently just outside their pen. He never tried to break down the fence nor did Curly seem upset with me for penning his friends. I have seen Curly’s bonding behavior with both steers and heifers, making the hormonal urges of a bull seemingly irrelevant for explaining this unusual behavior.

I have come to view Curly’s behavior as kin to that of Ferdinand the Bull. You recall the 1938 short animation by Walt Disney of an especially gentle bull who liked to sit under a cork tree and smell the flowers. Well Curly to my knowledge doesn’t smell flowers but he is surprisingly docile like Ferdinand. He approaches me open mouthed when I feed, wanting me to stuff range cubes directly into his cavernous maw. While I have at times given into the temptation, something about such close contact with such a huge and potentially dangerous animal is off putting to say the least. 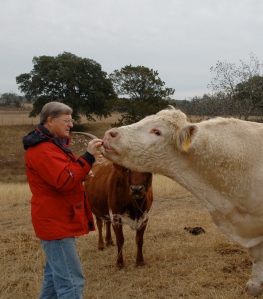 Now I know I am anthropomorphizing here as did Walt Disney in his short video. Perhaps other explanations exist for Curly’s bonding with calves. Perhaps he wants to round up “the strays” in the pen and herd them into the larger herd. Might this provide an explanation? Nevertheless, this doesn’t wash with me. Why would he lick on the calves, nuzzle them, and hang around when it is clear the fence prevents their following him.

In any event, Curly has proved incredibly gentle. He doesn’t wander off (read ferociously butt his way through fences) like our prior bulls. Instead he will stand at our perimeter fence and meekly gaze at neighbor cows or nuzzle them through the fence. Curly is known to take his turn at babysitting young calves. Typically one mama cow will stay with a group of young calves for protection while the other mothers graze. Never before had I witnessed a bull taking a turn at babysitting, well at least not until I met Curly.

These are the maunderings of a rancher, especially one with a lifetime of interest in exploring behavior. Perhaps I have too much time on my hands. Any other thoughts on Curly’s predilections would be welcomed. Please leave a comment.

2 thoughts on “Curly- Our Ferdinand”