For those of you who have read my musings, it will come as no surprise that I enjoy three wonderful dogs. Our relationship is truly symbiotic and benefits me at least as much as I benefit them. Just two days ago, I saw further evidence of this.

My morning ranch chores are predictable. I begin with a stop in the pickup at the stock tank where I feed the ducks and fish. From there it’s off to care for and feed the horses, feed the cattle, and then  two additional stops at the new ranch, Hidden Falls, where I am growing catfish and bluegill in two different bodies of water. Following this predictable pattern, my tasks on the ranch vary.

I must have been distracted the other morning as I rattled down the hill in the old gray goat (a 1999 Dodge ranch pickup) as I missed turning on the trail leading to my first feeding stop. Bella, our Border collie, became perplexed and immediately sprang into action. As an aside, Border collies are incredible at picking up patterns and re-enforcing them. 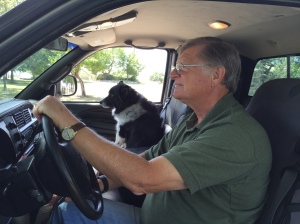 In any event Bella suddenly left her front right seat of the pickup where she chooses to ride shotgun and hopped over to where I drove. She stuck her cold nose in my ear and feverishly began to nuzzle me. This rousted me out of my daydreaming. I realized what had happened and halted the pickup, backed up, and took the trail leading down to the stock tank to my first stop of the morning.

As soon as I had begun backing the pickup up, Bella settled back into her usual place, contented her human was finally acting in a predictable way.

Just as dogs fill the crevices of our emotional lives with trust and love, so too do they assist us in other even more tangible ways. Bella again reminded me of the many ways she and the other members of our pack keep me on the straight and narrow and fulfill their expectations.

Animals on the ranch, dogs, Life On The Ranch, Raising Hay, ranching January 13, 2016 Leave a comment 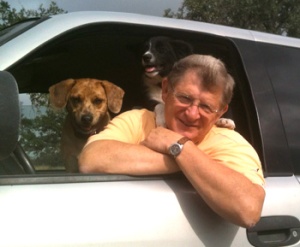 Yours truly ready to work on the ranch with assistants Jack and Bella.

Some may recall the little brown dog we took in and named Little Jack. We named him after Jack Kerouac as both had spent time “On The Road.” Little Jack in short order stole my wife’s heart and continues to be her favorite among our three dogs. The brown splotchy coated Little Jack of questionable lineage has a sweet disposition (except around varmints) and cuddles much better than do our Border collies.

A question persists in our minds as to how Little Jack became lost, survived for at least a month on the road (spotted by friends), and eventually how found his way to our front yard where our two Border collies penned him securely in the corner of our yard. Nevertheless, an event occurred recently that may shed light or at least provide a theory for Jack’s period of wandering.

About a month ago my friend and former colleague, Ralph Menard, arrived with pick up and trailer to obtain hay for his cattle. I loaded his trailer using my tractor to load the 1000 pound large round bales.

Following the loading and saying goodbye, Ralph headed for his ranch on the other side of Fredericksburg. I then closed up the barn, loaded my Borders into the pickup, but despite calling and searching was unable to locate Little Jack. I momentary panicked, for it would not do for me to show up at the house without Trudy’s little dog.

I carefully inspected the barn to see if Little jack might have been accidentally been locked in. I found this was not the case. I then drove back to the house to see if, by chance, he might have taken off on his own for the home. I saw no sign of Little Jack. I proceeded to hail Jack and search the ranch for him, thinking he might have taken off chasing a deer or rabbit. Again no sign of Little Jack. My apprehension mushroomed. I could see Trudy relegating me to the couch for losing her dog.

it was only then that I recalled having heard an almost subliminal beeping coming from Ralph’s pickup- the sort of beeping that accompanies an inviting open door. The idea struck home. I immediately called Ralph on his cell phone and asked if, by any chance, he was hauling along with his hay a little brown dog. There was a short pause. I imagined Ralph twisting in his seat and inspecting the backseat. I then heard Ralph exclaim in his rich baritone, “WELL YOU LITTLE RASCAL!”

Sure enough riding in his backseat, as contented as a fat man at an all-you-can-eat restaurant, was Little jack. My, that dog loves to travel. We’ve learned than when Jack sees an open vehicle door, he gets in- no questions asked. We’ve even had to remove him from UPS and FedEx trucks.

Ralph being the good friend he is, immediately reversed course. Our pickups met up on a country road where Jack appeared anxious to leave Ralph’s truck and load into mine. I may have imagined it but that dog seemed proud of himself for having stolen an unexpected trip. 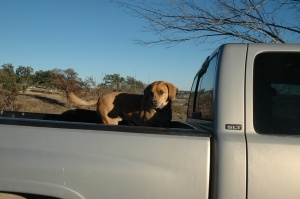 So here’s the question. You think a similar occurrence might have happened prior to his coming to our ranch? Might Little Jack have jumped in a strange vehicle and later been turned out? Of course, we’ll never know for sure how the apparently well-cared-for dog suddenly found himself lost. We can only be grateful that he discovered our ranch and for all the joy he has brought us. Now if only Little Jack will learn to stay home!

Let me know your thoughts. All theories are welcomed.